Three principal targets have been recommended for future exploration work:

The Fiset Syenite intrusion is a prime exploration target recommended for further exploration.  The figure below shows the interpreted outline of the Fiset intrusion with cross-hatched lines bounded by northeast and north trending structures outlined by the red ellipsoids.  Mechanical stripping and diamond drilling are recommended to further explore zones of magnetic depletion that are conductive to the northeast of the Fiset Showing.  Typical drill hole depths up to 150 m are budgeted for this phase.

The Moray Unconformity is an interpreted 10.5 km long structure outlined by 3 blue ellipsoids in the figure below, and a prime exploration target recommended for further exploration.  Of particular significance is the intersection of two NE trending splay faults and two N to NW trending cross-structures with the Moray Unconformity.  Noranda drill hole NOR-8, drilled in 1965, intersected 5 m of massive pyrite cross-cut by quartz-carbonate veining returning 69.38 g/t Ag.  Diamond drilling is recommended to further explore zones of magnetic depletion that are conductive along the key splay fault intersections transecting the Moray Unconformity.  Typical drill hole depths up to 150 m are budgeted for this phase.  1st derivative plots are imperative in accurately determining structural breaks.

Two high magnetic, paired ultramafic intrusives separated by faulting, outlined by the 2 yellow ellipsoids in the figure below, have been interpreted over 10.5 km and are prime exploration targets recommended for further exploration.  Considerable exploration work has already been carried out on the Moss-Tremblay Nickel Showing and the RTZ R & R Showing.  The extensive, paired magnetic trend southeast of Moray Lake, is interpreted to be an isoclinally folded synclinal structure and has received little exploration.  Exploration drilling work conducted by Noranda intersected 11 m of massive sulfides consisting of 75% pyrite, 10% pyrrhotite in intermediate to felsic pyroclastics along a 500 m long conductive trend.  Typical drill hole depths varying from 150-300 m are budgeted for this phase to allow for testing of deep conductance anomalies including known conductors in the vicinity of the Moss-Tremblay and RTZ Showings.  Borehole EM geophysics is recommended on deep drill holes exceeding 300 m depths. 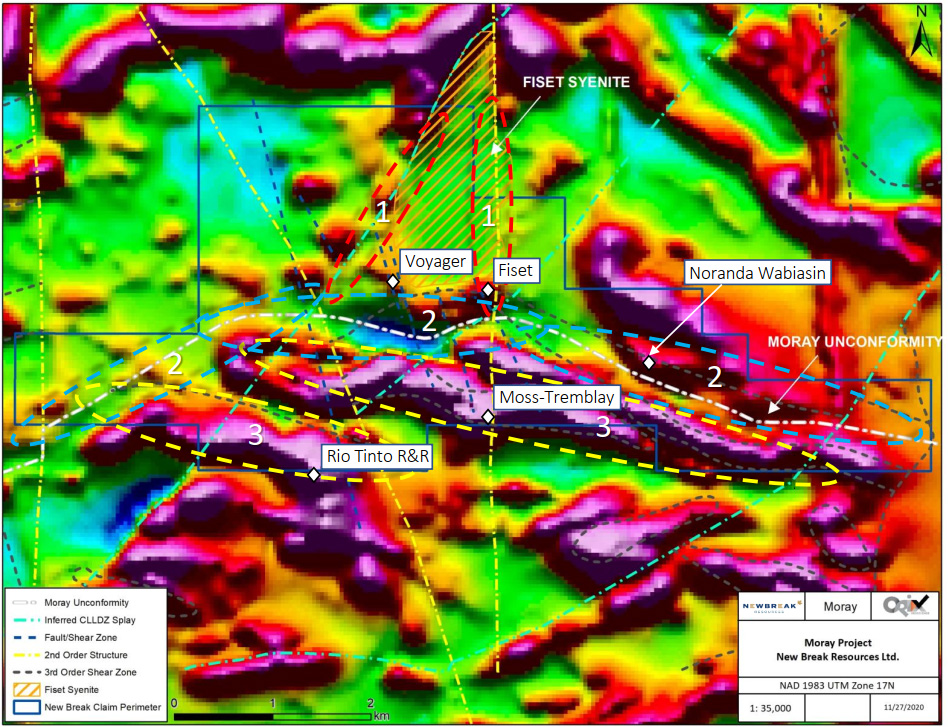 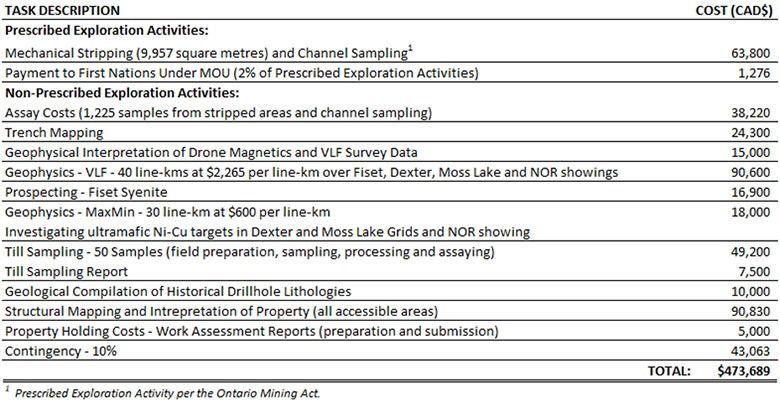 The Phase 1 budget encompasses mechanical stripping with associated sampling and geological mapping of newly exposed exposures.  The potential locations of the stripped areas have been defined based on the existing VLF and magnetometer trends and most importantly on the geophysical interpretation of the VLF and magnetometer data.  Two lines of glacial till sampling down ice of geophysical trends is recommended.  The objective of the till sampling is to further differentiate between VLF and historical IP conductors that are potentially gold bearing (such as the Felsic pyritic tuffs associated with Noranda’s diamond drillhole NOR-1) and those conductors that do not appear to be gold bearing (such as the main Voyager trend – VLF conductor 2W-F to 8W-E).  The Phase 1 budget also includes geological compilation of historical drillholes and structural mapping.  The geological compilation of historical drillholes will provide an enhanced understanding of lithological contacts and the potential continuity of different lithological units.  The structural mapping program is intended to clarify the structural history of the Moray Property particularly where there are structural trends that are gold bearing, as observed at SGX Trench 12.

The Phase 2 budget is contingent on the results of Phase 1 and is intended to drill the three main targets:  the Fiset Syenite, the Moray Unconformity and the Paired Ultramafic Intrusive. The “all inclusive cost” figure of $230 per metre of drilling was used as being representative of the costs associated with current drilling programs.