The Sundog Gold Project (“Sundog”) is located approximately 235 km from Arviat and 370 km from Rankin Inlet on the Hudson Bay coast and lies 16 km to the northeast of the Cullaton Lake airstrip.  Sundog is located on parcel AR-35 of Inuit Owned Land (“IOL”) and covers approximately 9,415 hectares.  The surface rights are managed by the Kivalliq Inuit Association (“KIVIA”) and administration of mineral rights is managed by Nunavut Tanngavik Incorporated (“NTI”).

The Sundog Property is characterized by high grade surface gold exposures over a minimum 2,500 x 500 m area.  There are two banded iron formations (“BIF”) on the property, with the potential for Musselwhite-Meadowbank-Meliadine type mineralization.  The Ennadai-Rankin greenstone belt has the potential to host world-class to giant mineral deposits.

At the nearby former Cullaton Lake Mine (“Cullaton”), 100,000 ounces of gold were produced from the period October 1981 to September 1985 from 383,000 tonnes at an average grade of 8.95 g/t Au.  O’Brien Gold Mines began underground development in 1976.  After receiving $25 million in loans from the Inuit Development Corporation, Cullaton Lake Gold Mines Ltd. (“CLGML”) completed construction of on-site mill facilities in 1981.  The ore milled at the site came from sulfide mineralization in two distinct ore bodies, with 150,000 coming from the B Zone (BIF hosted), located near the mill site and 233,000 tonnes from the Shear Zone (orthoquarzite outcrop), located 5 km to the north.  Access to mine workings was by declines starting at portals in bedrock outcrops.  Corona Corporation purchased CLGML from Royex Gold Mining Corporation in 1988.  Homestake Canada Inc. then acquired the property in 1993 through the acquisition of International Corona Corporation by Homestake Mining Company (“Homestake”).  The property changed hands again in December 2001 with the acquisition of Homestake by Barrick Gold Corporation.

The Sundog Property was discovered in 1961 by Mr. H. Macdonald, a prospector working for Selco Exploration Co. Ltd.  Grab samples from quartz veins associated with the original 1962 MacDonald Showing, assayed up to 102.9 g/t Au.  The Property is characterized by high grade surface Au exposures over a minimum 2,500 X 500 m area.

In August 1986, a field crew returned to the Property and conducted a 9-day sampling program from the Sundog trenches.  A total of 26 rock samples and 13 panned concentrate samples were collected both on a reconnaissance basis and from the main showings.  Spectacular visible gold was identified in rock rubble from Pit 1 (now Trench 29) and from Pit 2 (now Trench 17).  Trench 17 yielded the best assays of 39.1 g/t Au from a grab sample and 206.7 g/t Au from a panned concentrate.  The gold was associated both with the quartz veins and as fine disseminations in highly altered volcanics, volcanoclastics and schists.  The assay results for the 26 rock samples and 13 panned concentrate samples are shown in the following tables:

Abermin returned to Sundog in the Fall of 1987 and completed a one-month field program which included detailed mapping of the grid area, Very Low-Frequency (“VLF”) ground geophysics, a humus geochemical survey and a mechanical stripping program.  38 trenches were excavated and mapped and 27 of them were sampled and assayed.  Assays were carried out by Terramin Research Labs Ltd., located in Calgary, Alberta. 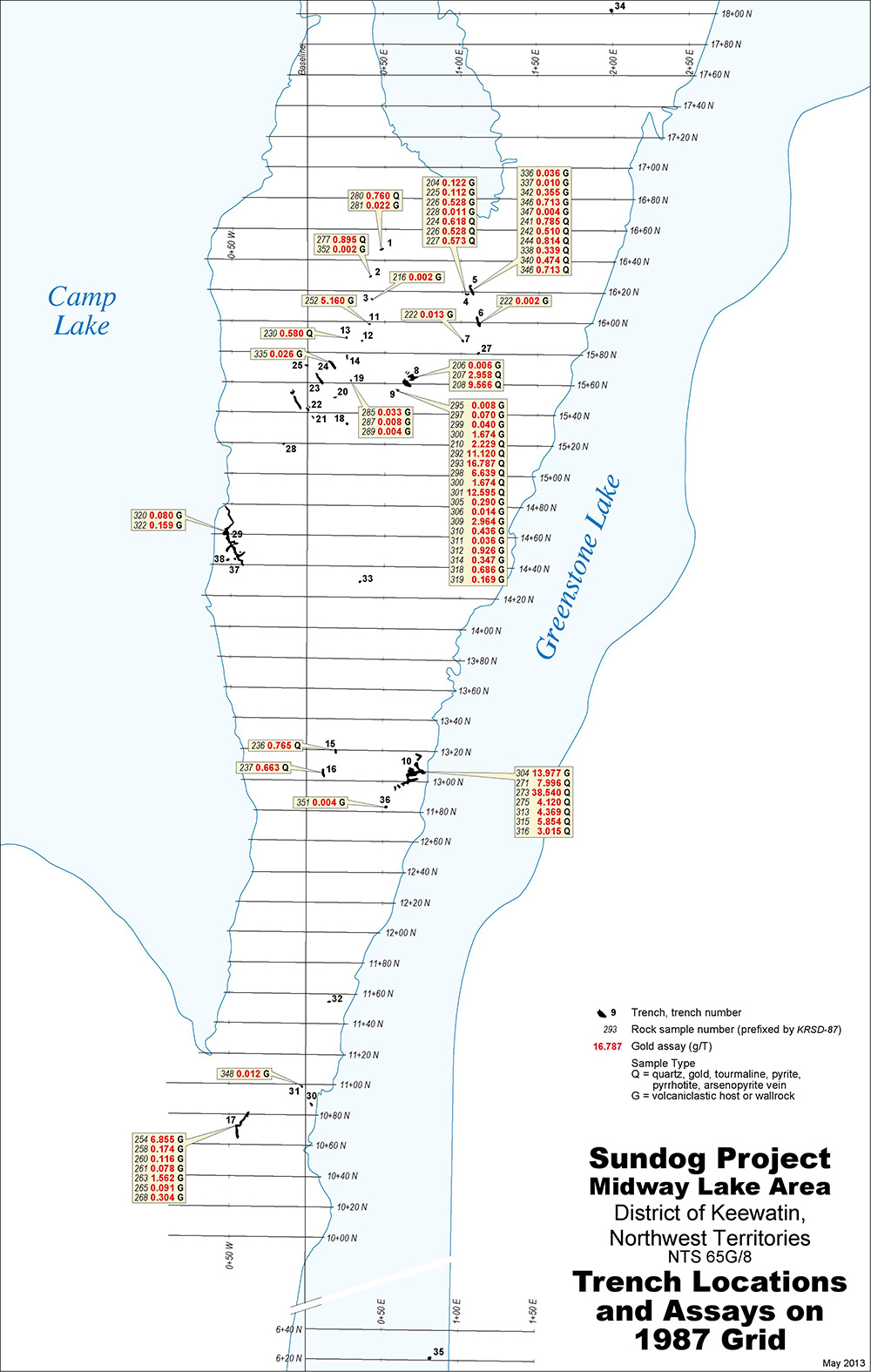 Trench 29, 37, 38 Area – Original 1986 (Pit 1) discovery site.  There are a series of interconnected quartz rubble pits having visible gold in quartz.

The rock samples were re-assayed using metallic assay techniques.  In their 1988 report, detailing the 1987 exploration program, Abermin reported that the average gold content of samples submitted for full metallics analysis were more than 800% and up to 1,000% higher than regular assays, which shows that there is a significant amount of coarse native gold present.  72% of samples submitted for metallics increased in gold concentration when reanalyzed by the metallics method.  It was concluded that metallic analysis should be routinely used on Sundog samples in future exploration programs.

Ken Reading returned to the Sundog Property, on his own, in 2013 and collected 17 samples with gold assays varying between 0.06 g/t Au and 10.67 g/t Au.  He also collected 18 lithological samples for further characterization.

The Sundog Project area occurs within the Ennadai-Rankin Archean greenstone belt within the Kaminak Subprovince, part of the Western Churchill geological province of the Canadian Shield.  This prolific greenstone belt extends westward for over 700 km from Rankin Inlet. 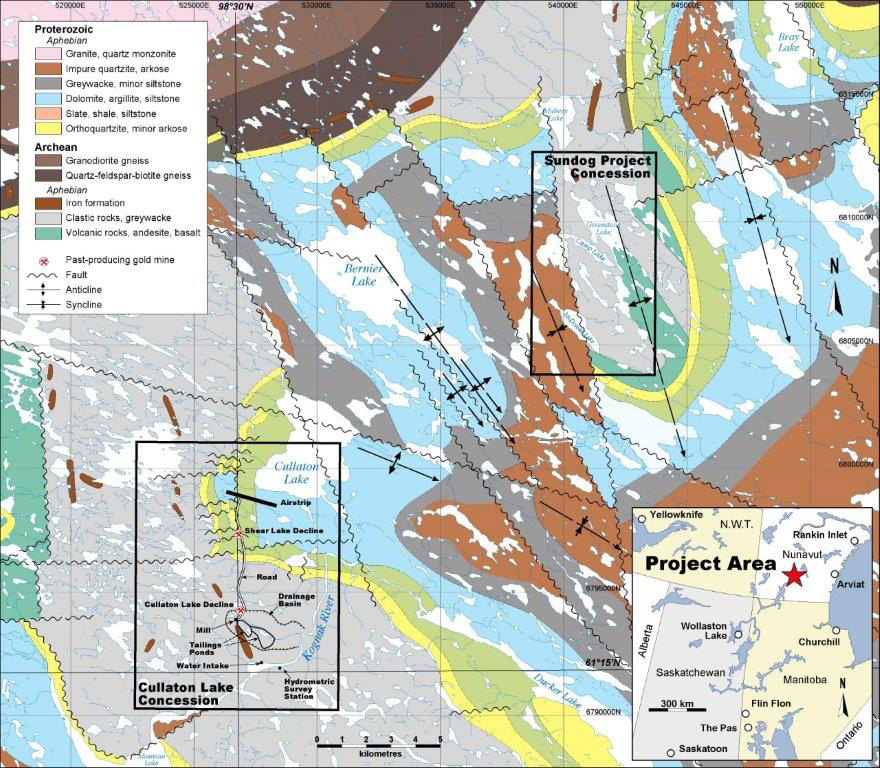 The regional geology of the Kognak River area comprises Henik Group rocks, a volcanic, clastic and sedimentary sequence overlain by Proterozoic sediments of the Hurwitz Group.  The sequence can be considered monoclinal progressing upwards from basal mafic -intermediate volcanics, with iron formation interbedded, through intermediate volcanics and volcanosediments to the south and west of Greenstone Lake.  There is no detailed geological map of the area of the Sundog mineralization, but on the basis of hand specimens and thin-section study, the host rocks are interbedded volcanic wackes, fine siltstone or tuff and intermediate volcanics and diorite.

Honey-coloured iron-poor sphalerite, chalcopyrite and other sulfides are common in the host volcaniclastic greywacke.  Tourmaline, chlorite and carbonate alteration are widespread. The majority of “barren” host rock greywacke volcaniclastics and a possible subvolcanic intrusive have above background gold values with assays up to 13.98 g/t Au and up to 11% Cu.  The average of 37 grab samples of host greywacke is 0.328 g/t Au.

The assay values at Sundog and very high background values in wall rock indicate a potential for an open pit environment.  Overburden in the tundra environment is thin to non-existent.  The mineralization is hosted by volcaniclastics near or at the interface with basalt-andesite and clastic sedimentary strata.  There are also two banded iron formations on the concession, with potential for banded iron formation (“BIF”) type mineralization.  Analogous deposits are currently being mined by Agnico Eagle Mines Ltd. at the Meadowbank gold mine, north of Baker Lake and at the Meliadine gold mine, 290 km southeast of Meadowbank. 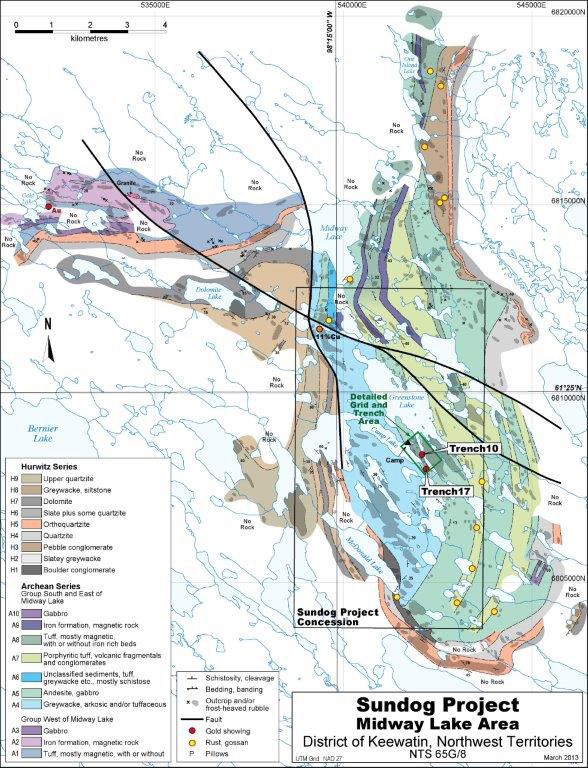 Geology of Midway Lake and 9 x 5 km area of Sundog Project.  Compilation based on an unpublished 1965 geological map by C. Parks and G.E. Parsons.